The Grand Canyon is an iconic vacation spot for good reason. It's truly one of those breathtaking views that cannot be adequately captured on camera or film because of how massive it is and how and each vantage point offers a different perspective. I cannot think of a better way to spend time than wandering through nature, marveling at staggering beauty.

Like many National Parks, you could find enough to do here to spend an entire week - there's a bounty of trails and programs. However, we covered most of it in two days and felt that was adequate time to capture the essence of the Grand Canyon.


The park is divided into two main sections - the North Rim and the South Rim. If you're planning a family vacation, you're focus will probably be the South Rim. The North Rim is pretty remote and has little to offer in the way of amenities.

The park can further be divided between the Left, towards Hermit's Rest, and the Right, toward Desert View Dr. During our trip, we spent the first day exploring the Visitor's Center, which is about dead center, and then we followed the trail along the rim toward's Hermit's Rest. On day 2, we drove down Desert View Drive ending at the Desert View Watchtower.

What You Need to Know

There is a shuttle system that will get you all the way down to Hermit's Rest in the one direction, and partly down Desert View Drive, in the other. We went during the off season and were surprised at how quickly the shuttles filled. We decided to mainly walk the trail down to Hermit's rest, taking the shuttle now and then between the longer stops, and then took the shuttle for the return trip back to the parking lot. On day 2, we skipped the shuttle altogether, opting instead to drive ourselves since the shuttles don't go all the way down Desert View Drive. Be sure to check before you go to be sure of shuttle operations and road closures specific to the time of year you'll be visiting. 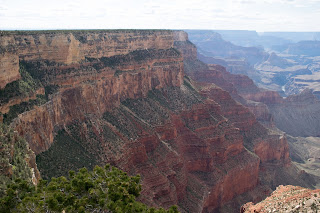 Be on the lookout for ranger-led programs! We attended one right off the bat and it was a great way to learn more about the park! My kiddos are both readers, but even they can only pay so much attention to an endless array of placards - there's just something more engaging about a live person, and an expert no less.

The Grand Canyon also has Jr. Ranger booklets! For those who are interested in attaining a badge, this Jr. Ranger program requires children to participate in a ranger-led program, so plan accordingly.

The park now has a mobile app! Check it out and download it before you leave home.


For food and lodging, check the website for the most up-to-date information. Tusayan, a small community about 7 miles South of the park, has some options. We stayed in Williams, which is about an hour from the park. It had lots of food and lodging options and some interesting Route 66-related activities and stores. For both days, we ate breakfast in Williams, ate lunch at one of the Grand Canyon restaurants or snack shops, and then headed back to Williams for dinner, surviving off of our own snacks and water in between times.

You can hike down into the canyon, but it's tenuous and takes a lot of time - the better part of the day. Our boys were 8 and 11 when we went and even though it was May, it was hot. We decided against that particular hike, but it's certainly worth considering if you have teens and everyone is in good physical condition.

Overall, this is probably a trip better suited to bigger kiddos and teens, but little ones can certainly be accommodated, it just might be more work for mom and dad - lots of stamina and a watchful eye. The paths were all in good condition and might work for a very rugged stroller, but carriers will be your best bet here.

With so much to see and do in the world, I don't often find myself longing to return to a place I've already been, but the Grand Canyon has found a place on that list. I'd love to return when my boys are older teens or adults and hike into the canyon with them and maybe raft on the Colorado river. But no matter when you go or what you're able to do - or not do - you'll be sure to remember the sheer beauty and grandeur that is the Grand Canyon National Park.

The park offers 2 free lesson plans! One on Geology in National Parks, and another on Stratigraphic Column Formation. In addition, browse through these "distance learning" resources for all ages!